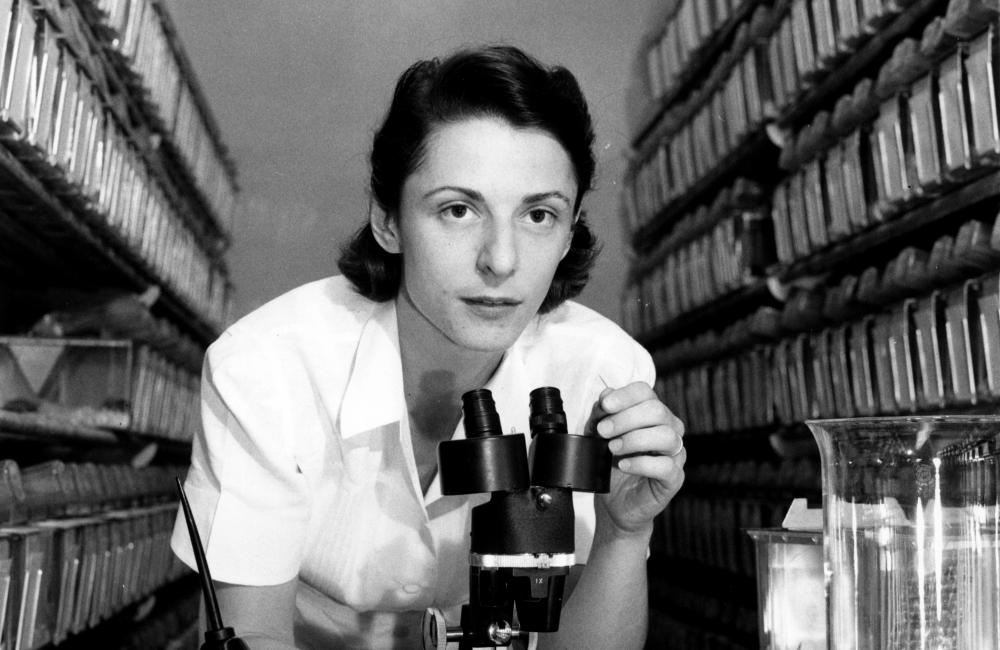 A select group gathered on the morning of Dec. 20 at the Department of Energy’s Oak Ridge National Laboratory for a symposium in honor of Liane B. Russell, the renowned ORNL mammalian geneticist who died in July.

During the four-hour event hosted by the Biosciences Division, Lab staff, retirees and current and former Liane B. Russell Fellows spoke about the diverse research enabled by Russell’s work, her life, and by the distinguished early career fellowship established in her name.

Dabney Johnson, the former head of the mammalian genetics program at ORNL, opened the symposium by describing the impact of Liane “Lee” Russell, a “very small woman with a very big brain.”

“Lee entered a mostly male science world,” she said. “Within a few short years, she was one of a total of four women who had international recognition in the field of genetics.”

Lee’s research accomplishments would come to include discovering that the Y chromosome is male-determining in mammals and that x-ray radiation is harmful to developing embryos, Dabney said. Russell was also an active conservationist responsible for the preservation of the Obed Wild and Scenic River and the Big South Fork National River areas, as well as a card-carrying member of the ACLU who hired the first college-educated African American woman at ORNL, according to Dabney.

“She really mattered,” Dabney said. “She counted, and hers really was a life well lived.”

The symposium displayed how the diversity of Russell’s achievements is reflected today at ORNL. Staff scientist Sandra Davern described how her own work developing nanoparticles as a delivery system for cancer-fighting radioisotopes is a “nod” to Russell’s earlier radiobiology experiments. Today, some of Sandra’s team meetings are held in a room dedicated to Russell, where “she’s looking over and, hopefully, approving the work,” Sandra said.

Melissa Cregger, a former Liane B. Russell Fellow, presented her research on how soil microbial communities respond to the loss of foundational tree species, namely hemlocks. When Melissa met Russell in 2016, she said, Liane talked about her love for and interest in preserving hemlocks.

While some fellows work in the biosciences, the Russell fellowships, established in 2013, are not reserved only for those studying Liane’s focus areas. Christa Brelsford, for example, a current Russell Fellow in the National Security Emerging Technologies Division, presented her work using “community detection” algorithms to examine the spatial properties of communities and ultimately reach conclusions about urban issues like wealth, disease and infrastructure. Former Russell Fellow Chengyun Hua, of the Materials Science and Technology Division, spoke about her research using theory and thermal spectroscopy to study heat.

Since its inception, the fellowship program has produced several DOE Early Career Research award winners, including former Russell Fellows Katie Schuman, of the Computer Science and Mathematics Division, and the Physics Division’s Kelly Chipps, who both spoke. Katie, who grew up just a few miles down the road from the Lab in Harriman, Tennessee, mentioned that as a teenager learning about the genetics research at  ORNL’s “Mouse House” research facility, founded by Bill and Liane Russell, actually made her consider a career as a geneticist for a time.

Lee and fellow former ORNL researcher Gene Rinchik “had such an instinct for genetics and biology,” Bem said.  “More than anyone else I’ve ever met, they could look at an experiment and say, ‘There’s something here.’”

But Liane “didn’t just do great science,” Bem said. “She did it in a very special way.” That special way, Bem added, included fostering “a community that really cared.”

If the Liane B. Russell Symposium was any indication, that community is as strong as ever.