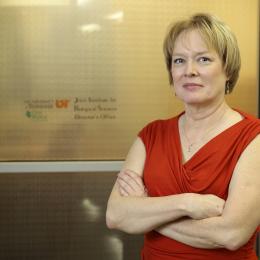 Marti Head is director of the Joint Institute for Biological Sciences, a collaborative research effort between Oak Ridge National Laboratory and the University of Tennessee focused on new approaches to drug development, personalized treatment, diagnosis and prediction of outcomes in health management.

Marti was senior director of The Noldor, a collaborative GSK-Palantir team, and head of the Insights from Data team in the Platform Technology and Sciences (PTS) department of GlaxoSmithKline. PTS spans the entire range of drug discovery and development, partnering with the therapeutic areas from initial biological hypothesis through selection of clinical candidate and formulation of physical drug product.

Marti joined the computational chemistry group at GSK in 1997, built and led the Philadelphia computational chemistry group from 2001 to 2007, and from 2007 to 2014 was the director of Computational Chemistry US, a 30-person, cross-site team responsible for proactively and creatively applying computational technologies to drive programs across all of GSK’s therapeutic areas from target selection through to candidate selection. In May 2014, Marti took on a new role leading the Noldor, who work to embed the Palantir data integration and exploration platform widely throughout GSK.

Marti has authored numerous publications, presentations, and book chapters in computational and medicinal chemistry and is listed as an inventor on multiple drug discovery patents. Marti has served on the editorial boards of the Journal for Chemical Information and Modeling and the Journal of Computer-Aided Molecular Design, was a member of the external advisory board for the NIH-funded Drug Design Data Resource and of the Allotrope Foundation board of directors, was a charter member of the NIH study section “Macromolecular Structure and Function, Section D”, and is a science advisor and board chair for Dance Exchange in Takoma Park MD.

In 1991, Marti received her B.S. in Chemistry from Hamline University in St Paul MN, where she carried out experimental studies of the factor I-mediated modification and release of red blood cell-bound immune complexes and developed a computational model of the system, doing systems biology before it was a “thing”.  She completed her Ph.D. in Chemistry at Duke University in 1995 in a joint project with the computer science department, developing algorithms to use a special-purpose, massively parallel computer to understand geometric properties of protein structures.  Marti subsequently was a National Research Council postdoctoral fellow at the Center for Advanced Research in Biotechnology in Rockville MD, where she developed statistical thermodynamics methods for directly computing equilibrium constants for non-covalent association between two molecules.