When Hope Corsair’s new colleagues at Oak Ridge National Laboratory ask her about her area of expertise, she tells them it’s “context.” Her goal as an energy economist is to make sure ORNL’s breakthroughs have the widest possible impact on society by looking at all the variables, including affordability and accessibility.

Corsair describes her work in the Electrification and Energy Infrastructures Division as sitting at the cross section of social sciences and engineering. Her undergraduate degree reflected what would become a multidisciplinary career path — she earned a bachelor’s degree in fundamental sciences with specialization in mechanical engineering, environmental science and technical communications from Lehigh University.

“Even before going on to grad school, I was on this trajectory of taking a more holistic view of technology,” she said. “It’s not just ‘how do we make a better solar panel’ — it’s also ‘how do we make one that people can afford and will use?’ and then, ‘how do we make it something that fits well into the electric grid and encourages adoption?’”

Her industry experience sharpened an interest in infrastructure improvements with the widest positive impact, with an emphasis on making them economically viable and accessible for a variety of applications.

It’s essential to know how a breakthrough fits in technologically, Corsair said, but it’s also important to know how it fits in economically and sociologically. Understanding the environmental justice aspect of technology gives researchers an opportunity to bring many considerations to their designs. “What can be adopted equitably and affordably? And what kind of incentives might that require, if any?” are some questions an energy economist can bring to the table, she said.

One aspect of Corsair’s work at ORNL is at the intersection of the grid and hydropower, including analyzing how decisions to dispatch hydropower affect other water uses, such as irrigation, flood control, recreation and environmental services.

The value of hydropower to a decarbonized grid is high, as the projects provide critical energy storage and power flow control to offset the impacts of increased renewable generation such as wind and solar.  Pumped storage hydropower is the largest source of energy storage in the nation, representing 93% of utility-scale storage capacity. Nearly 1.5 gigawatts of hydropower is under development, according to ORNL’s latest Hydropower Market Report, with 70% of that coming from retrofitting non-powered dams and another 25% from capacity additions at existing powered dams.

“If we are going to decarbonize the economy, hydroelectricity is going to play a hugely critical role in that as we move away from fossil resources for the power grid,” Corsair said. Bringing knowledge to the development of new hydropower involves many variables, including impacts on shipping and boating, fish populations and tribal rights.

As she moves forward, Corsair will continue to apply her experience in the electrical engineering and renewable energy space to help guide the lab’s applied energy development, demonstration and deployment.

She comes to the lab from the Oregon Institute of Technology, where she chaired the Department of Electrical Engineering and Renewable Energy. In addition to her time in the classroom, Corsair mentored students in optimization and life cycle modeling, energy analysis and policy and energy economics. She built a techno-economic model of electric generation assets and guided students through simulated market participation.

A lifetime of mentoring

Corsair enjoyed teaching and mentoring students, but it left her little time for research, which prompted her to begin looking for opportunities to get back to the lab. “Sharing knowledge is a big part of my work, but I also wanted to create knowledge. I’m delighted to be here at ORNL where I can perform very relevant research at the intersection of economics and technology,” she said.

Her first interest in science and engineering came, as it has for many of her colleagues, in the form of a love of LEGO. “When I was a kid, I wanted to be an astronaut. So my parents started buying me space LEGO, and I quickly got interested in building the spaceships that would take me to the moon or Mars.” Corsair’s love of science was also familial — her father was an engineer, and her mother worked in administration at Lawrence Berkeley National Laboratory in California.

After earning her undergraduate degree, came the context questions. “I started looking at things in context and realized engineering wasn’t enough. I wanted to know ‘why can’t we?’ Why can’t we just shut down all the coal plants and convert to wind?

“Well, on the technology side let’s start with intermittency, and look at costs, too. How much might that cost in lithium-ion batteries for grid-scale storage for when the wind isn’t blowing? What is the geopolitical context for getting that much lithium?” she asked.

“Modernizing and decarbonizing the grid is a bit like rebuilding an airplane while it’s flying, without changing the route and while trying not to raise ticket prices. As a kid, I liked building with LEGO; as I grew up, I came to realize that there is context surrounding everything you build,” she said.

Corsair intends to continue connecting with students at ORNL by participating in the lab’s mentoring and community outreach programs. She is especially interested in reaching underrepresented groups in science, including students from low-income households and first-generation college students. “This is the economist coming out in me again. There’s a whole lot of talent we’re losing. For the good of our future, we can’t afford to exclude three-quarters of the population and still expect to do really world-class work,” she said.

“I want to go out and tell even the very little girls, ‘hey, let’s get out the LEGO and let’s build something today.’ Pull out your phone and show me what you can whip up as an app. If there isn’t an app for what you want to do, why haven’t you coded it yet?” Corsair said. “It really struck me when I became a professor that we still had the same number of women sitting in the classroom as I did when I was an undergraduate. So, let’s get more opportunities out there for everyone. This can only benefit our society as a whole.”

UT-Battelle manages ORNL for Department of Energy’s Office of Science, the single largest supporter of basic research in the physical sciences in the United States. The Office of Science is working to address some of the most pressing challenges of our time. For more information, please visit www.energy.gov/science. 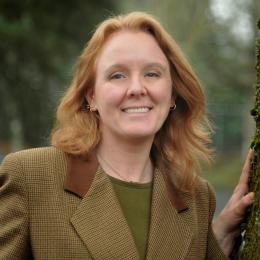