During the workday, Anthony Walker spends considerable time designing models to advance our understanding of Earth’s biological systems. In the evenings and on weekends, he takes a more hands-on approach to the natural world, whether working in his garden or out kayaking on area waterways.

The terrestrial ecosystem modeler has tackled a variety of tasks since arriving at Oak Ridge National Laboratory 4 years ago, including leading an international group of scientists exploring how forests respond to elevated levels of carbon dioxide (CO2).

“Plants take carbon out of the atmosphere and can slow the rate of increase of atmospheric CO2 as a result, but we haven’t gotten a strong handle yet on the mechanisms at the global scale that drive that uptake and feedback,” said Anthony, who works in the lab’s Environmental Sciences Division.

It was this research area—specifically ORNL’s Free Air CO2 Enrichment Experiment (FACE) that studied an intact deciduous forest for clues as to how it may respond to CO2—which first drew Anthony to ORNL as a doctoral student in 2009. His FACE fieldwork as a postdoctoral research associate grew into detailed computational work as a staff scientist at the lab.

With the models he and other researchers develop at ORNL as part of the lab’s Climate Change Science Institute, Anthony examines various hypotheses to explain such phenomena and determine which are the most probable.

“The only way we can fully address these biological systems, with all their complexity, is through modeling,” he adds. “We simply cannot combine all the hypotheses for all these different processes in our head and then think it all through to a prediction; it is just not mentally possible.”

Anthony credits a friend’s interest in computer science for piquing his curiosity about the computational side of biology and plant science while in college. But Anthony’s engagement in science began years earlier as a child growing up in a gardening family, and his own fascination with David Attenborough documentaries and the natural world.

Anthony earned his undergraduate degree in plant science at the University of Sheffield and later completed a master’s degree in sustainable agriculture and rural development at Imperial College in London.

He returned to the University of Sheffield some years later to pursue a PhD in computational ecosystem science. In the intervening years, Anthony worked at an organic farm and at an urban land management non-profit. At those institutions he engaged in some hands-on tasks such as managing a tree nursery and using a Clydesdale horse to help mow the grounds and control bracken in the Peak District, a national park in the United Kingdom.

“It’s a nice counterpoint to being sat behind a computer all the time. It’s good to get out and get your hands dirty,” Anthony said. These days, that time is spent in a sizeable backyard garden where the researcher grows corn, tomatoes, Scotch Bonnet peppers, and other vegetables. He also works on home renovations, engages in the occasional pickup soccer game, and is learning to kayak on the Hiwassee and Nantahala Rivers with the East Tennessee Whitewater Club.

The researcher has an appreciation of East Tennessee’s cultural history as well. “It’s pretty cool to go out and listen to a fiddle being played here, and it sounds just like the music back home,” he said. “You can hear those Scottish, English, and Irish roots coming through.”

Anthony is also working on the multi-institutional Next Generation Ecosystem Experiments-Tropics project, including research into how soil nutrients such as phosphorous may limit plant productivity and how that mechanism functions in tropical rainforests.

Currently, Anthony’s key project at the lab is at a slightly different scale: he is developing a framework for various leaf photosynthesis models. Rather than looking at a single model, he is creating a mega model in which multiple hypotheses are presented for a process. “If you combine those together, you get a system in which you can figure out which processes are creating the most variability in model predictions,” he explained.

The researcher said he enjoys the collaborative nature of his work at ORNL. “There aren’t many institutions in the world where you can sit with so many people with different skills yet all focused on similar questions,” he said. “I’ve learned a lot from this team and some close international collaborators. Success in science these days comes down to a team working together, not just individuals working alone.

“It’s a real privilege to be a scientist,” Anthony said. “Getting to study the natural world in a creative way with excellent people is what gets me out of bed in the morning. To be able to add a little to the body of human knowledge would be excellent. But also being robust in those discoveries motivates me—really understanding what the data can or can’t tell us, and translating that into knowledge that helps us develop a sustainable and vibrant future.” —by Stephanie Seay 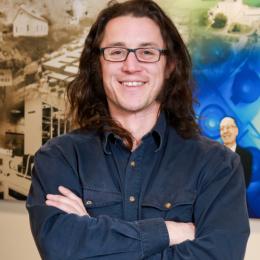